As an Amazon Associate I earn from qualifying purchases. Some of the links on this website may link to vendors which are "affiliate links". If you click on a link I may receive a commission.

There are several types of bear repellent. These include Capsaicin deterrents, Strobe lights, Noisemakers, and Bear spray, so does bear repellent work?

All of them work in different ways to repel bears. However, these products may not be effective in every situation.

Learn how to use each type of bear repellent to stay safe while hiking or camping.

Capsaicin is the active ingredient in chili peppers. It is widely used in food products, pharmaceuticals, and animal deterrents.

It causes a burning sensation upon contact. It is an irritant to both humans and other mammals. It is used in bear sprays.

Bear spray contains about 2 percent of capsaicin, which is slightly higher than the level in self-defense pepper spray.

The spray contains capsaicinoids, which affect a bear’s eyes, nose, throat, and lungs. The effects last for minutes to an hour.

Bear repellents that contain capsaicin work by spraying bursts of atomized capsaicin. They are effective at a distance of up to eight meters.

The fumes cause swelling in animal membranes and cause breathing difficulties, forcing the omnivores to leave the area.

Bear sprays come in a variety of strengths. Some sprays last four seconds, which is not enough time for bears to react. Others only spray for fifteen feet.

Bears are known to charge up to 30 miles per hour. In addition to their inflammatory response, bear sprays may not be effective against a charging bear.

Capsaicin-based bear spray contains Oleoresin Capsicum in a water or alcohol-based carrier. The mixture is pressurized and dispenses into the air.

As the bear approaches, the chemical reacts with the oxygen and mixes with the air, intensifying the burning effect.

Bear sprays containing capsaicin contain a high concentration of capsaicin. But they are different from regular pepper sprays.

Most bear repellents use the same stuff that goes into regular hot sauce. They cannot be as effective against bears as regular pepper sprays.

The Counter Assault Bear Spray contains 2.0% major capsaicinoid. The canisters can protect you up to 35 feet away from the bear.

They also contain a safety cap to minimize accidental discharges. They are reusable and have a holster that helps you carry them comfortably.

Bear Shield bear spray has been tested at Brown Bear Resources in Missoula, Montana, and Elmendorf AFB in Alaska. It offers a 100% quality guarantee, so you won’t have to worry about a weak batch.

The product delivers 1.84 oz. per second and empties in about five seconds. That’s faster than the minimum six seconds needed for the deterrent to work.

If you’re hiking in bear country, you may be wondering: Does bear repellent work with noisemakers?

Despite the common belief that loud noises will scare off bears, research has shown that some kinds of noisemakers are less effective than others.

In fact, it’s important to know that some types of noisemakers can cause serious damage to bears’ hearing or skin. Fortunately, there are plenty of safer alternatives.

Noisemakers are portable devices that emit a high-pitched screeching noise. Unlike torches, noisemakers don’t require a firestarter to use, so you can use them safely.

However, noisemakers shouldn’t be used if they are not properly stored and crafted. This is because a cluttered launcher can obstruct the noisemakers’ launch point.

Noisemakers work best when they are used at a distance and to deter a bear approaching from behind. You also need to make sure that the bear has a clear exit route. Otherwise, it might get startled and not be able to avoid you.

Besides, noisemakers may not deter a bear immediately, so you might want to use them in conjunction with other techniques such as human dominance.

The Alaska Department of Fish and Game provides several websites and brochures with useful information on deterring a bear.

The Arctic National Wildlife Refuge’s brochure suggests the use of noise makers. Air horns, which are cheap and easily accessible, can also deter a bear.

Besides being more effective, noisemakers are safer and less expensive than bear sprays.

Bear spray is a useful deterrent that you can use to protect yourself in the woods, mountains, or on a campsite. Bear spray works best when it is used at close range.

You should aim the spray in the bear’s direction, and then depress the trigger. You should do this in two or three second bursts.

It works best if you aim at the bear’s head and eyes. Do not spray the entire bear; just spray enough to make the bear run away.

Bear spray is more powerful and has higher pressure than standard pepper spray. It also works longer and further than pepper spray.

Bear spray is widely available and inexpensive. However, some bear spray instructions are inaccurate and may not be effective.

EPA regulations require bear sprays to have a registration number and a label stating what they’re intended for.

While bear spray may not be as effective as gunshots, it can be a life-saver in situations where you need to protect yourself.

The spray is 98% effective and will deter a bear from charging towards you. However, gunshots won’t always deter a bear because bears are huge and hard to hit when they charge.

Pepper spray is another popular bear spray. The Counter Assault brand of pepper spray and UDAP bear spray have been developed to protect you from bear attacks in a non-lethal way.

These sprays contain capsicum, which is an effective deterrent to bears. Pepper spray is not allowed on airplanes.

When approaching a bear, try to make a loud noise and yell. This will alert the bear that you are present and will not harm it.

Alternatively, try to move away from the area while speaking in a normal voice. If this doesn’t work, use the bear spray as a last resort.

Remember that bear spray shouldn’t be used on passive animals, such as a dog or a cat. The spray’s fragrance may attract the animal and could even result in an illegal encounter.

You must also be careful not to use the spray when it is raining or in cold weather. If the spray is on your clothing or tent, you need to use a white vinegar solution to clean it.

Bear spray should only be used on a bear that is charging at you.

Welcome to my site my name is Josh and Nomad Hiker is my passion I love to get out and experience the hiking trails all around me and am preparing for a Triple Crown run in the next few years.

I have been hiking since a kid back in Washington State and nothing would be more fantastic than to travel on the PCT back by Stevens Pass and the areas we hiked as kids.

My goal is to convince more people to get outside and to hike responsibly along with learning more about themselves and their abilities! As a father and husband I have to be more frugal with my gear choices so I focus on finding quality performance as often as possible! 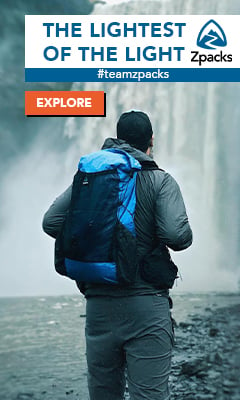